The Boutique Moda del Guanto located in via Santa Teresa 19, dates back to 1905 and tells a story that sees Turin as a protagonist. The ancient tradition that came along with it has marked the times, fashion and people, but the true hallmark of Italian made handcrafted quality has remained unchanged.

The magnificent Art Nouveau frontage of the store in walnut and poplar protrudes slightly from the line of the other buildings. The boutique sign is supported by winged griffins and a mirrored display window, a layout used frequently in the 19th century to reflect the light outwards. Inside, on the other hand, you will find a small and luminous wood paneling wrapped in mirrors, original light wood furnishings and period cabinets, as well as a multitude of colours. Everything is reminiscent of ‘The Accessory’ which has marked the hearts of entire generations, from the most elegant ladies of the aristocracy and industrial bourgeoisie of Turin, to the most fearless of speed racers; the glove, present in every shape, colour and model.

It is told that the Boutique was established by a certain Mr Scotti, a man with Neapolitan origins who already had another store in the City of Vesuvius (Naples). For many years the business was run by the Scotti’s family, which opened a second shop in the City of Turin (Via Garibaldi), called ‘Casa del Guanto’, boasting the status of the official supplier to the House of Savoy

In 1980 the Boutique was then sold to Ms Caterina Barbieri, and later in 2002 to Ms Anna Grazia Chieppa, a trusted store assistant for almost 30 years and now, the current owner. Ms Chieppa, an innovative and dynamic woman, has managed to bring together the styles and interests of two very different customer age groups, who look for quality gloves rigorously Italian made and made to measure.

Moda del Guanto has adapted to the times, thanks to the particular products such as half driving gloves which are highly requested by male customers and gloves in a very light, cotton fabric for use in the summer.

Nevertheless, the glove remains the undisputed protagonist of the business, with countless models in vibrant colours, so much so that during the 2006 Olympics the Boutique won an award for being the most colourful in street. For some years now, the shop has even appeared in the entertainment world, supplying gloves to Cinema and Theater.

Today, Moda del Guanto also offers a wide range of other exclusive accessories, from cashmere and silk scarves, to all types of women's hats, umbrellas, headscarves and men’s belts not forgetting the repair service that ensures every purchase is precious and contributes to the durability of the product. For a timeless fashion, such as elegance. 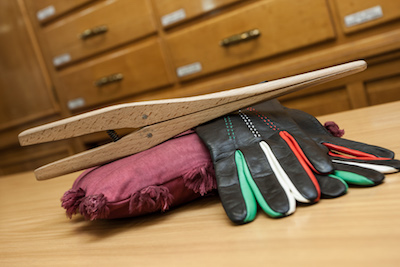 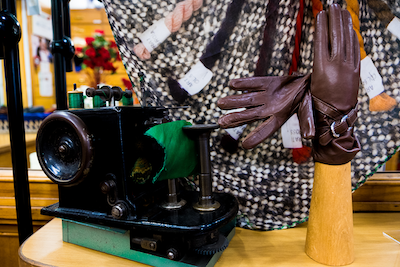 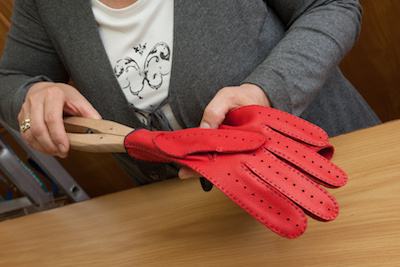 Since 1905 Moda del Guanto is the only historical Boutique in Turin that has lasted more than a century in the fashion industry. In 2012 Moda del Guanto received an award as best historical company from the Turin Chamber of Commerce.

Our products are certified Made in Italy and have always represented the incomparable ethics of 'Moda del Guanto'.

For Anna Grazia Chieppa, there is only one way to try on a glove and one that should never differ from tradition: "The customer rests their elbow on one of these purple cushions. The glove is prepared by spreading the fingers with a special tool (similar to two wooden sticks joined together like a pair of scissors) and then pulled on to the customer's hand, to check that it fits perfectly, without excessive abundances or tensions that could lead to the unstitching of seams."

Article from the Magazine 'The Sunday Times'

"We fell in love with Turin at a glove shop. We were following a walking tour in Turin (Eugenia Bell's excellent Civilized Traveller's Guide) when we spied Moda del Guanto. The glove store's old-fashioned cases drawers stacked high behind the counters drew us in. It's hard to find men's leather gloves in good colours. When the sisters pulled out a chartreuse pair with orange fourchettes, we started to tremble. Soon they'd unloaded every drawer. Their designs were fresh, their work was perfection, their pride was clear, but what really charmed us was their sweetness".